Message from Peter Hanlon, Founder Member of the Mad as Hell party and Independent Candidate for the Melbourne Constituency in the November 24 Victoria State Election. 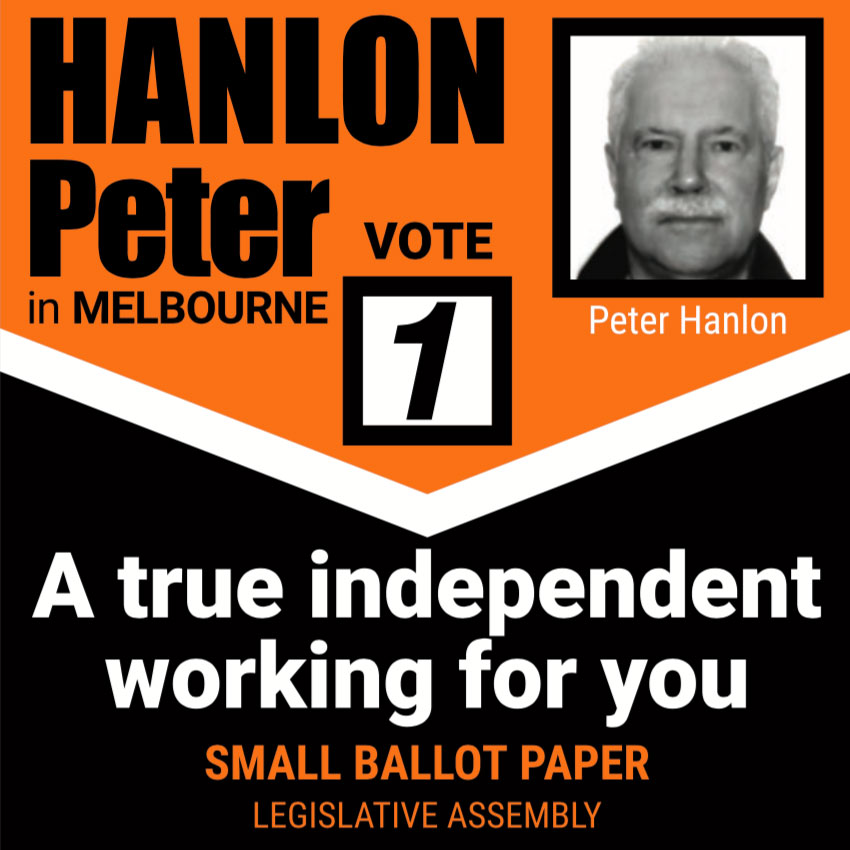 Peter arrived in Melbourne in 2005 , having enjoyed a career in banking that took him all over the world, great experiences working with different peoples, cultures and beliefs and governments.

Peter arrived from London in 2005 and soon came to love the city and what it has to offer- great arts and entertainment, where hip walks with history, tolerance flourishes with irreverence, great coffee is the early morning fuel, sport is a religion and open spaces are everywhere and fabulous.

From his early days, Peter has had a passion for current affairs and social justice, which spurred his nomination as a candidate for the Melbourne constituency  in the upcoming State election ; he is concerned that over the last 13 years Melbourne is in danger of losing its mojo and Victoria it’s soul ; despite economic progress, 80,000 Victorians await public housing, the fastest rising homeless population comprises single women 50-65 and 30% of families in Victoria survive financially on a month to month basis.

Victoria within Australia is blessed as a country with the second highest wealth per capita, but the disadvantaged and unfortunate are losing out, although often prepared for self help, if given the opportunity. Peter lived for seven years in North America and doesn’t want Victoria going any further along the path towards the US – gated communities, chequebook healthcare, institutional homelessness, plummeting public education standards and private affluence v public neglect, in many instances, squalor.

The Mad as Hell party is committed to deliver its promises, as an independent, disruptive , radical reform party that is truly Mad as Hell about the rorts, deceits and malpractices that have plagued misspending within the State’s $70Bn budget and forfeited the trust of electors, fed by the cronyism, factionalism and privilege that results in 91% of the electorate having little or no trust in politicians.

Spring clean Spring Street, move on the current crowd and enjoy government that’s honest, smart, caring and looking after you, with your money spent on future proofing Victoria to a digital era, investing in the spirit and energy of Victorians to bring their communities back to life, replacing social isolation with social inclusivity and celebration , and easing the cost of living strain and financial stress on Victorians, while providing support for those Victorians, on merit and self- help, to recover their self- esteem and a quality of life

Peter Hanlon, as an Independent, would welcome your vote at the Victoria State election on November 24 to work together to make a much better future for ALL Victorians.